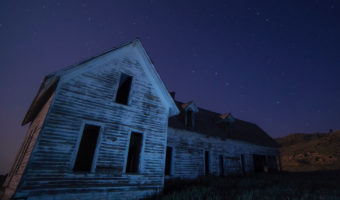 Cerpen Horor I Sat On the Bus

I sat on the bus, on my way to school.

Listening to music, and paying little to no attention to the other students.

At one of the stops, my mind snapped back to reality.

I looked towards the small house. Tommy’s house, I thought.

A hand slipped through the drapes of the window and waved the bus driver to move on.

‘He’s sick’, I thought, paying no large amount of attention to the situation.

The day flew by.

I watched the local news channel after school, and what I heard paralyzed me.

Tommy’s entire family was murdered that day by an unknown suspect.

After hearing this news, I moved back up to my room and quietly fell asleep.

The next day, I sat on the bus.

We drove past Tommy’s house and the bus driver, unaware of Tommy’s families fate, stopped at his home.

As I was about to get up and explain to her what had happened, something caught my eye.

A pale hand slipped through the drapes of the window and waved the bus driver to move on.

I sat on the bus, terrified.

A young girl is playing in her bedroom when she hears her mother call to her from the kitchen, so she runs down the stairs to meet her mother. As she’s running through the hallway, the door to the cupboard under the stairs opens, and a hand reaches out and pulls her in.

She whispers to her child, “Don’t go into the kitchen. I heard it too.”

My daughter woke me around 11:50 last night. My wife and I had picked her up from her friend Sally’s birthday party, brought her home, and put her to bed. My wife went into the bedroom to read while I fell asleep watching the Braves game.

“Daddy,” she whispered, tugging my shirt sleeve. “Guess how old I’m going to be next month.”

She smiled and held up four fingers.

It is 7:30 now. My wife and I have been up with her for almost 8 hours. She still refuses to tell us where she got them.

It was midnight. You were running through the forest in a heavy downpour when you see a small shack in the distance. Desperately longing for a refuge from the rain, you decided to take shelter there until the morning comes. A bolt of lightning strikes just as you opened the door, letting you catch a glimpse of the worn-out furniture inside the wooden shack.

Inside, you notice that there are so many paintings plastered all over the wall. Even under the dim light, you can see that the paintings were highly detailed and realistically drawn, yet there is something odd about them. Another lightning flash briefly illuminates the room, revealing the menacing gaze that all the figures in the paintings had. Each figure in the paintings seems to be looking straight at you, giving you an uneasy feeling. One of them even seemed to move when you are not looking.

Shuddering, you determined that it may be best for you to just ignore it and sleep it off. However, the unsettling aura that emanates from the paintings, accompanied by the noise from the storm outside makes it hard to fall into slumber. Despite all that, you managed to keep your eye shut and sleep, albeit scarcely, through the night.

A shining ray of light from the sun wakes you up in the next morning. You let out a sigh of relief, knowing that last night was probably just a nightmare. But after your eyes sweep through the surroundings, you let out a shriek of horror. On all the spots where there were paintings last night, you only found windows.